More carriers reaching out to women during driver shortage

There’s a shift taking place at carriers’ human resources offices that recalls Rosie the Riveter — the iconic, flexing factory worker popularized through a U.S. government media blitz during World War II when the defense industry sought to recruit women to build planes, munitions and so much more as millions of American men left to join the fight overseas.

Now, as the trucking industry continues to deal with historic congestion at the ports along with employee shortages from drivers to warehouse and office workers, Women in Trucking, a non-profit group that supports female employment in the trucking industry, is seeing more carriers and other industry players reaching out to women to help take on an unprecedented freight surge — though that approach, according to Women in Trucking (WIT) President and founder Ellen Voie, has been a longtime coming.

“What I find interesting is all of a sudden diversity and inclusion, they’re the buzzwords. It’s like, ‘Hey, we’ve been working on this for over 14 years. Welcome to our world,’” Voie said with a laugh.

In an industry that remains largely dominated by men and has historically been marketed to men, Voie remains energized, shrewdly aware of the industry’s challenges and with her sense of humor intact as she and others at WIT, according to the non-profit’s website, seek to “represent women who design the trucks, own the trucks, sell the trucks, fix the trucks and the drive the trucks.”

As their membership roster grows, WIT is also campaigning for increased gender diversity in the C-suite, as well as other positions in transportation and logistics. But it’s the driver shortage that remains one of their top priorities.

“Women still only make up 10% of over the road drivers, so there’s a huge opportunity to tap into this market,” Voie said. “But there’s two things that we have to do. First of all, we have to tell women they can do this job. And secondly, we have to make sure that everyone understands that it’s not your grandpa’s trucking industry.”

From driver recognition belt buckles to masculine uniforms, fleets have long focused their attention on men, Voie said, and that includes their recruiting efforts,  too.

The bandana-wearing Rosie the Riveter, popularized in part by illustrator Norman Rockwell on the cover of the Saturday Evening Post, also appeared on posters, in movies, newspaper articles and photographs, where she helped encourage millions of women to go to work at defense industry factory jobs normally handled by men.

In a similar vein, Voie and others at WIT are hopeful that carriers might be more deliberate in their recruiting efforts with women.

“When companies post job opportunity posters or whatever, hopefully they put females on that picture too because most people won’t do a job unless they can picture themselves doing it, and if all you see are pictures of men, you’re not going to picture yourself as a woman doing this job,” said Kellylynn McLaughlin, a driver and driver trainer at Schneider as well as WIT’s driver ambassador. 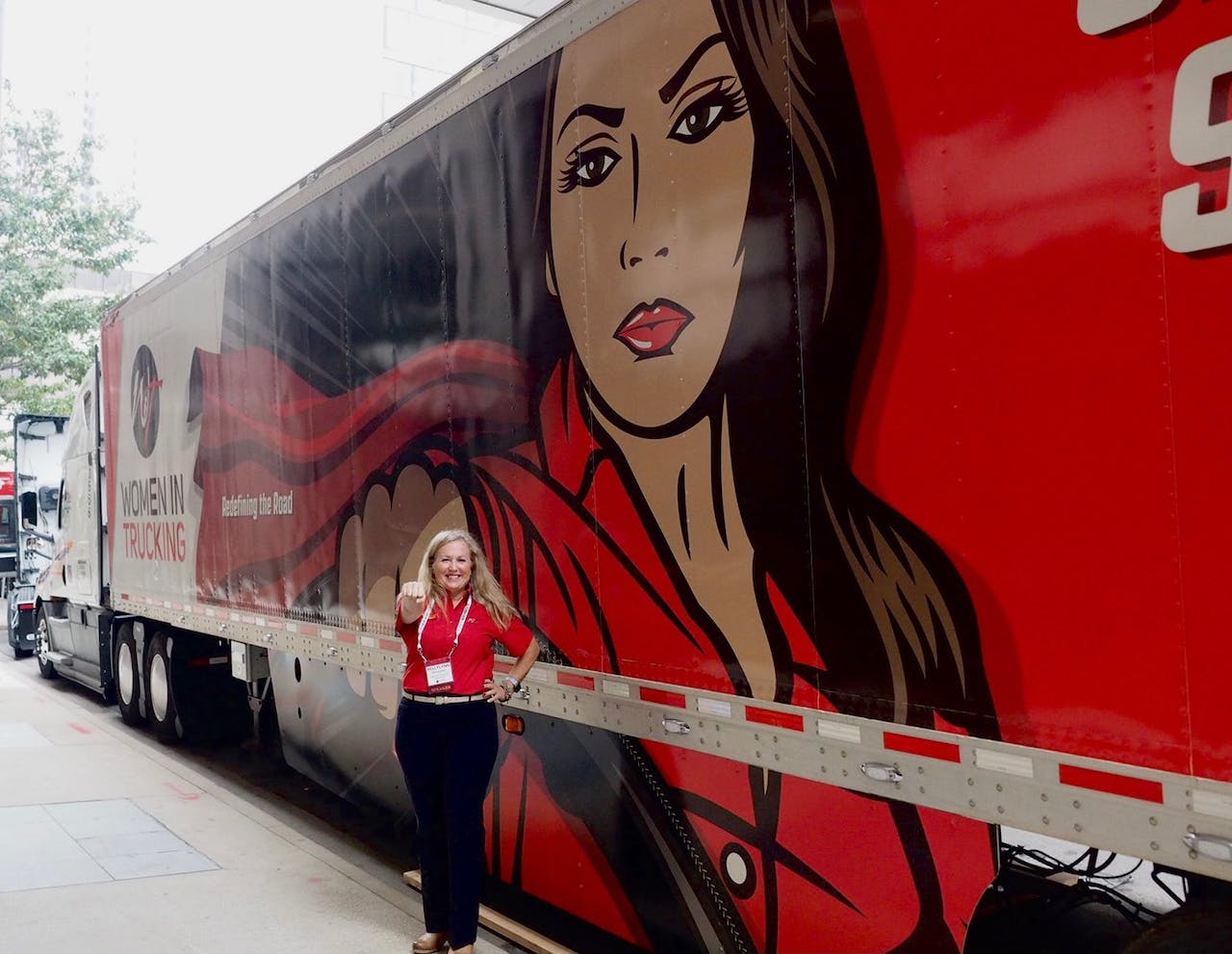 Women in Trucking (WIT) driver ambassador Kellylynn McLaughlin, who’s also a driver and driver trainer at Schneider, is proud to be driving WITney around the country where she’ll be telling women about a growing number of carriers that appreciate what they can do behind the wheel. “ATRI (American Transportation Research Institute) found that male commercial drivers were 20% more likely to be involved in a crash than female professional drivers,” said McLaughlin, shown above. “And so now their attitude is no longer, ‘Oh, we just hire the best person.’ Now their attitude is, ‘Oh my gosh. I see what women bring to the industry. Help us hire more female drivers.'”

McLaughlin will be hauling WITney across the country where the high-tech trailer will help educate women about career opportunities in truck driving. WITney’s driver simulator will also help give potential candidates a better idea of what it’s like to handle an 80,000 lb. rig.

“When she was parked in downtown Dallas, she was definitely an attention getter,” said McLaughlin who hauled WITney to the conference at the Dallas Sheraton with a 2020 Freightliner Cascadia provided by Schneider. “It was so funny how many people were just driving by on the street and were hollering out, ‘What is that?’ and ‘Go girl power!’ And she was definitely the selfie station.”

Both Voie and McLaughlin hope that WITney will help encourage women of all ages to seek a career in trucking, though it’s the youngest generation of potential drivers that’s proving more challenging to recruit.

“How do we get the women who are in their twenties or thirties to look at a career in transportation, because that’s the untapped market,” Voie said.

Like a lot of other drivers, McLaughlin began driving in her 50s after her kids were grown. She got interested in trucking after volunteering at her kids’ high school where she served on the board of directors for the marching band and became director of logistics.

We had a huge band — all these kids and equipment – and one of the pieces of equipment was this 53-foot low boy – an old moving trailer,” McLaughlin said. “There was a volunteer dad that drove it. I eventually got a ride in the tractor and I just was smitten. I was like, ‘Hey, I want to do that.’ And he said, ‘You can do it.’

“I never thought that I could,” McLaughlin continued. “I thought it was something that would require too much strength or mechanical knowledge or something out of my wheelhouse. And then I thought about it. Did I want to leave that on the table? No, I didn’t it. So I decided to give it a go and then I really liked it and found out I was good at it.”

A few years later and McLaughlin found herself driving for Schneider thanks to some advice she received while attending CDL school.

“I had a friend from CDL school and he went to Schneider and he said they really walked the talk when it came to safety,” she said.

That comes as no surprise to Voie who said when it comes to recruiting female drivers, “Safety is the top priority. Safety is huge.”

‘Not your grandpa’s trucking industry’

WIT Image Team member Jodi Edwards has been driving for 30 years with roughly 25 of those years spent at J.B. Hunt,  where she’s currently enjoying her role as an intermodal driver.

After three decades of driving, Edwards said she’s seeing more women behind the wheel and is hoping to see even more as WIT continues to expand its outreach efforts and inform women of how the industry is changing, which includes better pay and increased flexibility to accommodate busy lifestyles.

“It’s a great job,” Edwards said from her home in Pennsylvania. “It’s good money, and if you’re running locals, you can still do everything you did. You see soccer moms. I did all of those things. I was at the baseball games. I was at the volleyball games, Scouts, going to the school things. I could still do that as a truck driver.”

While some women have opted for team driving with their husbands or others, Edwards has preferred driving solo.

“When I first started the majority of the women that were driving were driving with a spouse,” she explained. “That wasn’t me. I was a single seat driver and I enjoyed it. It was sparse and people were of course surprised, but heck, they’re still surprised today.

“You see people look up at the truck and see a female and they’re still surprised but there’s so many more [female drivers]. Even as a local driver here we have eight or nine women, which is a lot when it was always just me for many years.” 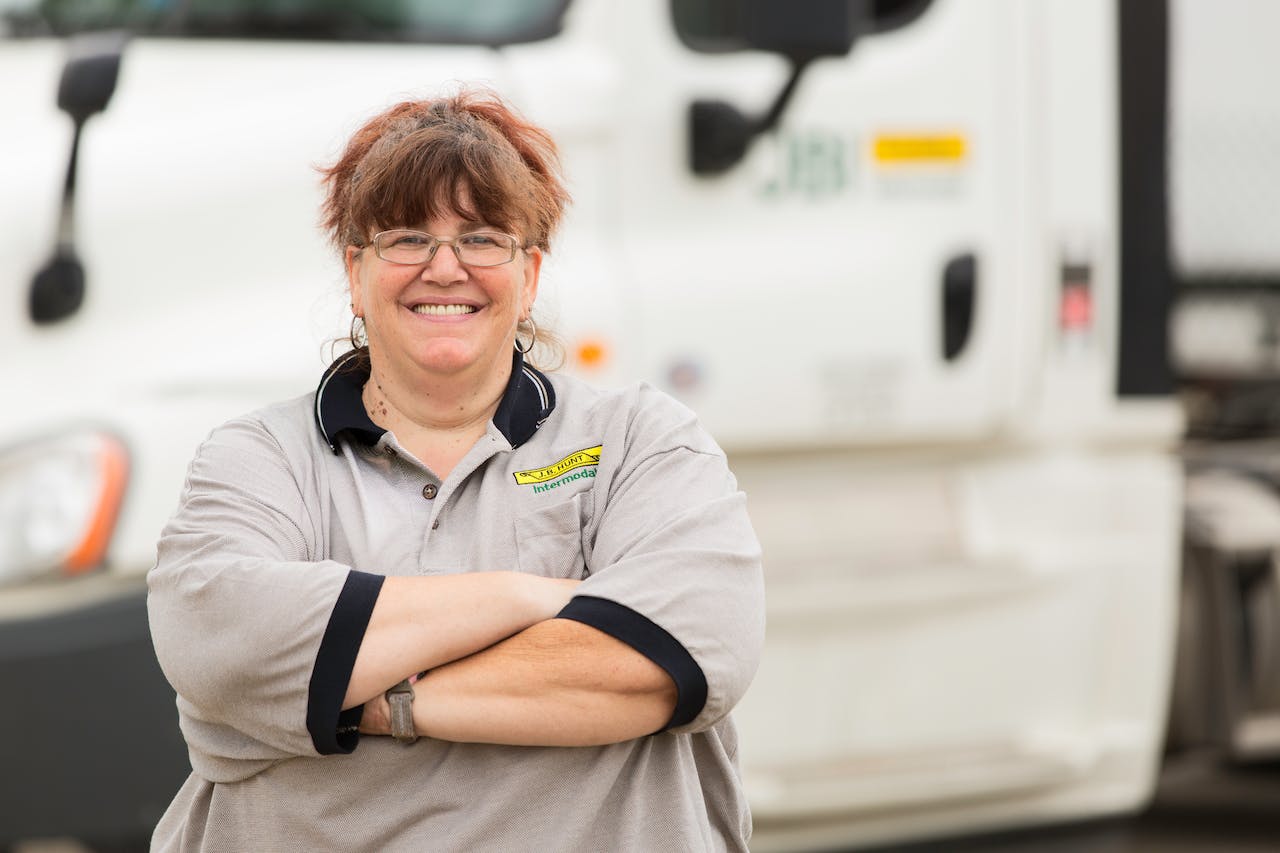 JB Hunt driver Jodi Edwards, shown above, has been putting her CDL to work for the last 30 years. Edwards, who’s also a member of Women in Trucking’s image team, said there’s a misconception about truck driving that can scare off potential recruits. “Honestly, I think a lot of people look at the size of the vehicle and get intimidated right away,” Edwards said. “They just think, ‘Oh, I can’t do that. It’s too big.’ But you know if you think about it, when you were younger, you were on a bicycle and you looked at a car like you really wanted to drive a car, but it was a little intimidating. Same thing. Just on a bigger scale.”

McLaughlin said she’s noticed that attitudes towards female drivers are changing on the road and are becoming more accepting.

“It definitely has changed just in the five to six years I’ve been with Schneider. When I first started out on the road, I was not some really hot chick out there. I was 50 years old,” McLaughlin said laughing. “But literally, my blonde hair, they could see it a mile away as soon as I turned into the truck stop. You could see and feel everybody’s head turning to figure out if it was a guy with long hair or if it was really a lady driving that truck.

“I would get so embarrassed and self-conscious that I would just try and park as quickly as I could, close my curtains and then sneak out and go and get in my shower and go get food or whatever I needed to do,” McLaughlin continued. “And now nobody looks. Nobody thinks anything about it. I go on about my job. Nobody says, ‘Hey, your husband lets you do this?’ There’s none of that anymore, which is great. I’m just another driver out here doing a job.”

Since founding WIT in 2007, Voie is encouraged by the changes she’s seen in industry attitudes but pointed out that there’s still more work to be done.

“I always tell [carriers], ‘Ask your female drivers what you should be doing differently because they will be very candid, but they need to be asked,’” Voie said. “A lot of times they don’t feel they have access to management, and I have to tell you, I’ve sat in on meetings where female drivers will say to management, ‘Hey, do you think that you could get women’s uniforms? Or do you think that you could have an equal number of women’s restrooms as you do for men?’ And then the management will look at them and go, ‘I didn’t think about it,’ and that’s what I hear the most. It’s because this is a very old industry and every big company out there started with a man in a truck and so someone needs to remind them that, ‘Hey, if we want to attract more women, then what can we do differently?’”